Understanding more about the Mazda SKYACTIV-X

​Mazda have always been innovators and have worked hard to revolutionise car design, both through exterior styling and interior detailing. The new SKYACTIV-X engine is no exception to this – it’s a revolutionary new combustion engine that will certainly help to improve your time behind the wheel.

President and CEO of Mazda Masamichi Kogai said the following about their new engine: “We have pledged to build a future in which we can coexist with the bountiful, beautiful earth by applying a well-to-wheel philosophy to achieve substantive cuts to carbon dioxide emissions.”

To reduce greenhouse gas emissions, more needs to be considered than just switching a car to electric power. Every aspect of the car needs to be thought through, this is why Mazda have adopted the ‘well-to-wheel’ approach that aims to reduce emissions at a number of points, including fuel extraction, manufacturing, shipping and, of course, driving.

To aid this, the SKYACTIV-X engine employs a method of combustion, in the form of a compression ignition. In fact, this is the world’s first engine of its kind and is something that the motor industry has been trying to master for over two decades!

To give you a better understanding of how the engine works, it’s best to start with some engine basics. In a gasoline engine, the fuel-air mixture is ignited by a spark that comes from a spark plug. In a diesel engine, the fuel-air mix is compressed and will ignite through pressure and heat alone as diesel is denser than petrol, which also means that more air and less fuel goes in and is why a diesel engine offers you better fuel economy. For this reason, diesel engines tend to release less carbon dioxide than gasoline engines; however, they traditionally emit more particulates that cause pollution. 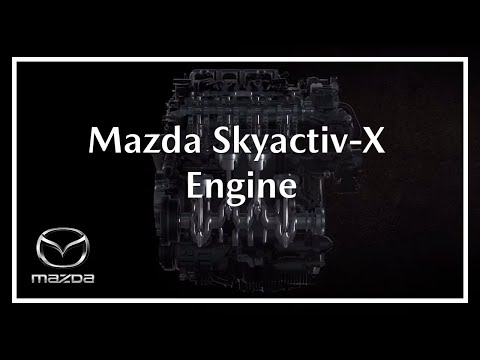 SKYACTIV-X offers the best of both engines with none of the disadvantages! This is thanks to the new technology called Spark Controlled Compression Ignition (SPCCI), which runs on regular gasoline (petrol) and the SPCCI works by compressing the fuel-air mix at a much higher compression ratio, with a very lean mix. It will then use a spark to ignite only a small, dense amount of the fuel mix in the cylinder. As a result, this raises the temperature and pressure, so that the remaining fuel-air mix ignites under pressure like diesel, therefore burning faster and more thoroughly that in a conventional engine.

Moving forwards, this internal combustion engine will continue to be the base power unit for around 85% of all of Mazda’s cars up until 2035, and, of course, this Japanese manufacturer has plans to introduce electric vehicles to their lineup, but as it stands, the SKYACTIV-X engine remains the most important breakthrough in helping Mazda meet their goal of reducing ‘well-to-wheel’ carbon dioxide emissions to 50% of 2010 levels by 2030, and a staggering 90% by 2050.

Currently, the SKYACTIV-X engine is available in the stunning Mazda3 and will be available in the upcoming Mazda CX-30 when it’s released in January 2020. If you’d like to find out more about the Mazda3 and book a test drive or register your interest for the CX-30, please get in touch with the helpful and friendly team at your local Johnsons Mazda today.